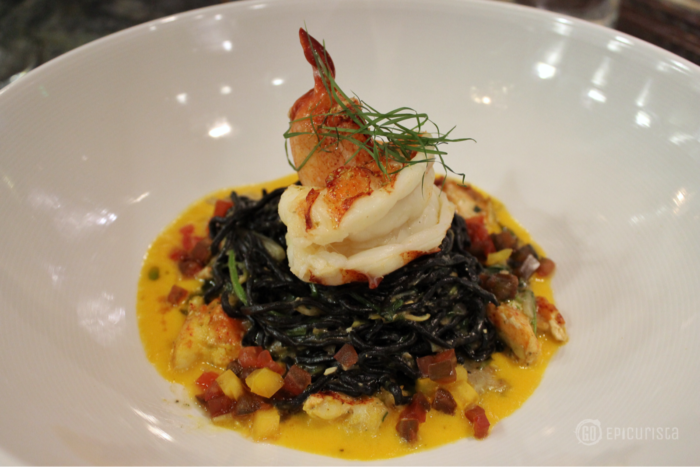 “Delicious Disney, A Chef Series” – An inventive one of a kind culinary experience not to be missed.

There’s no doubt any event hosted by the award-winning chefs at Disney will be memorable and inventive. Disney never ceases to amaze, going above and beyond to wow guests and create magical memories. When the Disney Chefs are involved, you know that includes tempting your taste buds. From the popular foodie festivals at Epcot to “Edible in The Field” charity events, to the various culinary experiences at the theme parks and Disney resorts restaurants, the choices for epicurean enjoyment abound at the Walt Disney World Resort in Orlando, Florida. The epic Delicious Disney Chef Dinner Series is a must do experience!

In 2016, the Walt Disney World Resort chefs launched a unique dinner series titled “Delicious Disney, A Chef Series” In 2017, they continued the well-received chef dinners with the theme of “storytelling with food.” Their aim is to showcase the stellar talents of the culinary team. The special events feature unique and inspired culinary creations coupled with creative wine pairings. Enjoy the luxurious and indulgent side of Disney. One-of-a-kind events worthy of your bucket list (or “someday list” as I like to call it!)

The Delicious Disney Chef Dinners are presented in an intimate environment, often no more than 60 guests, which allows greater guest interaction with the chefs. Nine dinners were scheduled throughout the year at various locations including Cinderella’s Royal Table in Magic Kingdom Park, Markham’s at Golden Oak, and backstage at the Walt Disney World Tree Farm. Although some events are sold out, there are a few seats remaining for the summer dates. You can celebrate Ratatouille’s 10th Anniversary, take a Journey Under the Sea, or Walk Around The World.

All events at Markham’s at Golden Oak, the luxury residential resort community located at Walt Disney World Resort, are hosted by Chef de Cuisine Phillip Ponticelli. Long-time fans of Disney dining will remember him leading the kitchen of Citrico’s at Disney’s Grand Floridian Resort & Spa prior to this current post.

Take a look at the schedule:

> July 19th at 6:30pm
Enjoy the exotic and exquisite tastes of a journey Under the Sea
Featuring Flying Fish’s Timothy Majoras and Team
Location Markham’s at Golden Oak

> August 16th at 6:30pm
A Walk around the World with Disney
Featuring Culinary Director Edwin Wronski and the Flavor Lab Team
Location Markham’s at Golden Oak

> December 6th at 6:30pm (SOLD OUT)
Farm to Table Dining Experience
Featuring a collaboration of our Disney Chefs
Location The Tree Farm

Call 407.939.5773 daily between 9 a.m. and 5 p.m. to make your reservations. If you’ve always wanted a unique Disney dining experience or are looking for a special evening celebration, don’t miss the opportunity to #MakeSomedayHappen at the Delicious Disney Chef Dinner Series.

“So we came to the Ritz hotel and the Ritz Hotel

“When love and skill work together, expect a mas

"The real voyage of discovery consists not in seek

“Your hand and your mouth agreed many years ago

"When the dog bites, when the bee stings, when I'm

“Brunch without booze is just a sad, late breakf

“The Italians and Spanish, the Chinese and Vietn

“The best things in life are the people we love,

"Those who don't believe in magic will never find

“Learn from yesterday, live for today, hope for

"I love spring anywhere, but if I could choose I w

“I wish that more women realized that helping an

“The soul becomes dyed with the color of its tho

“I want adventure in the great wide somewhere! I

"Your mission: Be so busy loving your life you hav

“If you are cold, tea will warm you; if you are

“It is the experiences, the memories, the great

Proud to be a 2021 CK Mondavi Ambassador! Follow #CKMondaviAmbassador and #CKMondaviWines for recipes and wine pairing tips.