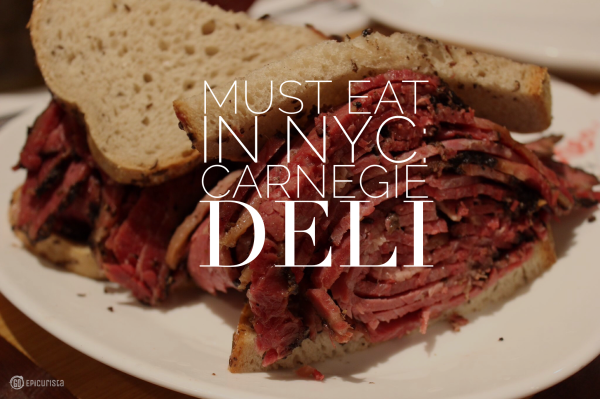 A journey exploring New York’s iconic foods is not complete if you have not dined on a gargantuan deli sandwich, preferably pastrami, with the meat piled high between two slices of Rye Bread. To call it a sandwich almost doesn’t do it justice. These are meals that could possibly feed a family of four, although you may not want to share! They are massive and considered a Must Eat Food of New York City. There’s a reason people even have them shipped nationwide, but you must experience them in an authentic New York Deli to truly get the full effect. There is nothing like that atmosphere. Even the surly attitude is part of the charm. Few places around the world and in The Big Apple do it as good as Carnegie Deli.

The History of Carnegie Deli

Opened in 1937, across Carnegie Hall, it was taken over and expanded by Milton Parker, known as The CPM – Corned Beef and Pastrami Maven. It is currently run by second generation owner Marian Levine, his daughter.

Carnegie Deli’s corned beef and pastrami sandwiches are insane, using nearly a pound of house-cured and smoked meat! Try the famous open-style Reuben with your choice of corned beef, pastrami or turkey, topped with melted Finlandia Swiss cheese, sauerkraut and Thousand Island dressing on the side or The Woody Allen with lotsa corned beef plus lotsa pastrami. These creations don’t come cheap at $24.99 – $27.99, plus a $3 sharing charge, but they are worth a try. 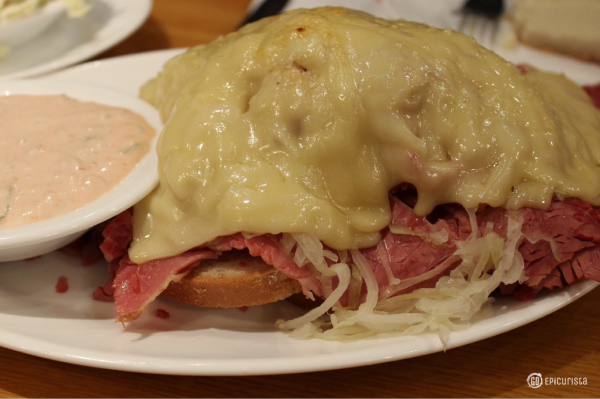 You can order just plain New York’s Best Hot Pastrami, Corned Beef, Brisket, Beef Tongue, Turkey, and other regular deli sandwiches from the counter or sit-down. We ordered the Hot Pastrami and the meat was moist and flavorful with peppery smokiness and the right amount of fat. 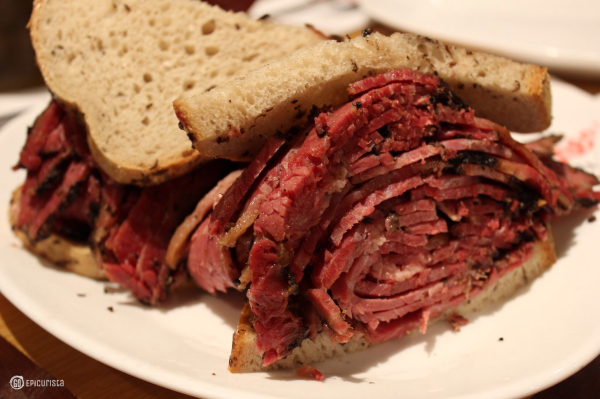 They are also known for their Jewish fare such as knish, stuffed cabbage, and matzoh ball soup. 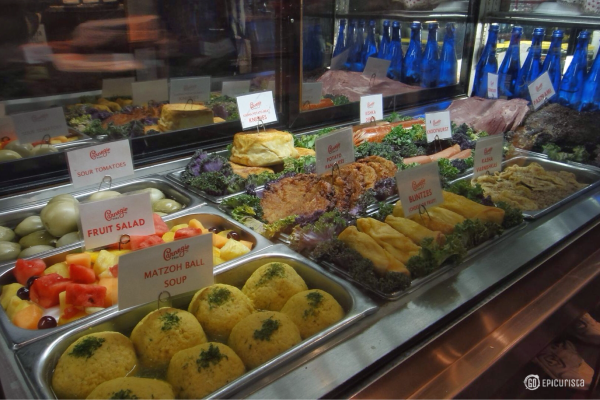 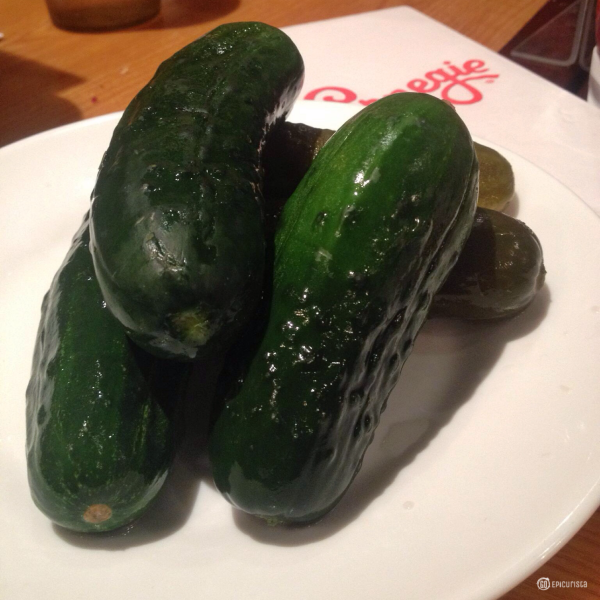 And, save room for the cheesecake. Made in-house, it is dense, rich, creamy and everything a New York Cheesecake should be. By the way, this is also another Must Eat Food of New York! 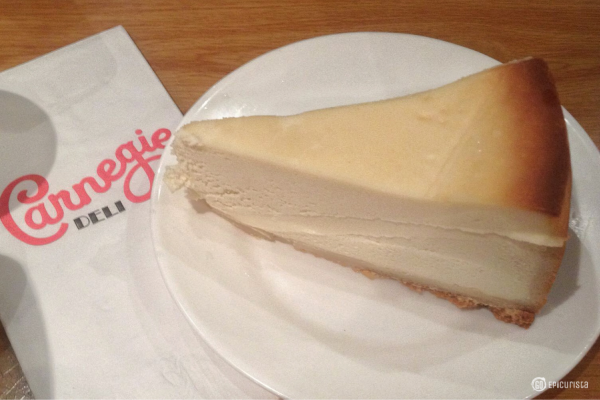 The restaurant, with autographed celebrity photos covering every inch of wall-space, is quite large and yet almost always full. When you first walk in, you see the deli counter to your right, and the staff working fast and furiously behind it. To your left, as you wait to be seated, is the dessert case. Very clever set up to get you drooling before you even sit at a table. 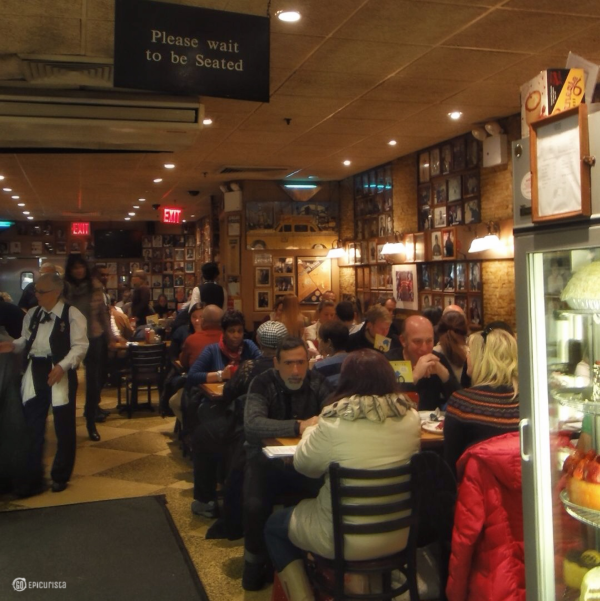 Carnegie Deli may be referred to as a tourist trap, however, don’t let that image deter you. The place is busy with locals and tourists alike and there’s a reason they’ve been around so long. If you don’t feel like waiting for a table, order your sandwich to go directly from the counter. You can avoid the sharing charge of $3 and the per person minimum spend of $12.50 which is not that difficult to reach when a pastrami sandwich is $17.99.

Let me tell you what you would be missing if you choose the To Go option.

At Carnegie Deli, they know how to pack people in. Seating here is not for those that want to stretch out leisurely or for those that want to have a private conversation. You are either seated at a small table that is within inches of the one next to it, or you are seated family style at communal tables sharing your space with strangers. In New York City, this is bound to lead to colorful dining companions and equally colorful conversation, and our dining experience was no exception.

During our weekend lunch visit, a quite popular time with locals, my niece, her husband, Mr. GO Epicurista and I dined at a long communal style table for 12. We were in the middle, next to a local Jewish family consisted of mom, dad and four adult children to one side and an older gentleman and younger girl to the other. The mom of the family was an absolute hoot. She reminded me of every typical Jewish mom stereotype that has been seen on film but in a fun way, almost as if she is in on it. She kept joking (I think) with her husband about the size of his meal and his appetite and he would also jokingly, just roll his eyes and proceed to devour the huge stack of corned beef in front of him. She even threatened to call his cardiologist. Oy vey! I hate to admit, but somehow being a part of their conversations (it’s difficult not to eaves drop) made this experience so much greater. We also got lucky because they dine at Carnegie Deli often, and being seasoned-regulars, they guided us through the menu providing recommendations for their favorites. They were ordering The Reuben and we followed suit. They also told us not to miss the pickles and to save room for cheesecake. Ha! Save room? 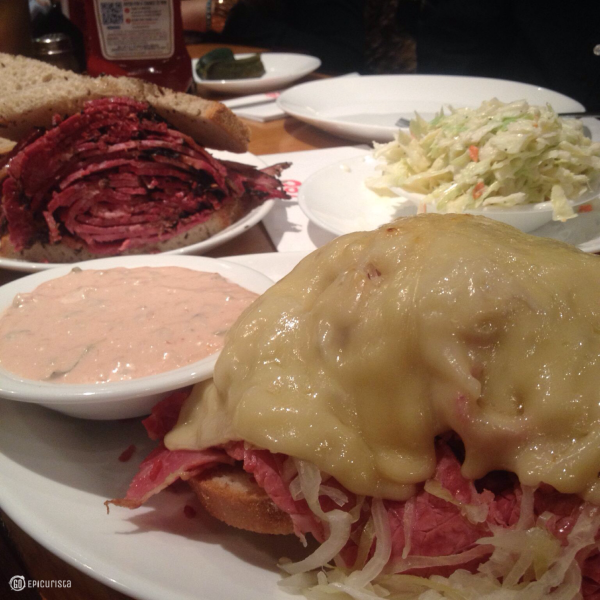 Recommendations from our table neighbors!

Sharing a table always leads to fun conversation and it’s another example of how food brings people together. Here you don’t have much of a choice being just a few inches away. On the other side of our large table and cramped quarters sat an older gentleman and a much younger girl. I learned later that we all speculated in our heads if it was father and daughter, grandfather and granddaughter, or possibly a young girlfriend? Hmmm. You just couldn’t help it being so close. Soon we discovered it was father and daughter. She was a college student and he was in town visiting. Nothing salacious going on here and they were also friendly but not as talkative as my family on the right, that’s for sure. 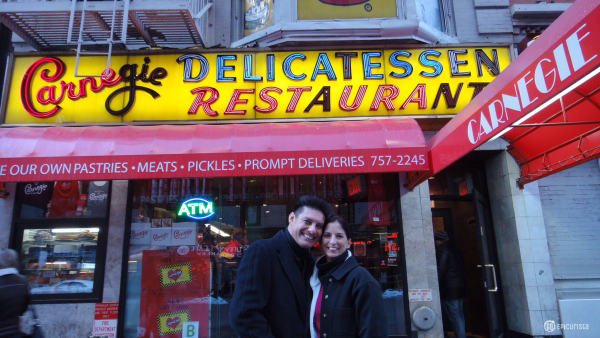 Happy and Stuffed at Carnegie Deli

Carnegie Deli is located at 854 7th Avenue at 55th Street, Midtown Manhattan in the Theater District.

Have you dined at Carnegie Deli? Were you able to finish one of those monster sandwiches? I would love to hear about it in the comments, so please share below.

Even with a sharing charge, Carnegie Deli is a great place to GO share a meal with a friend. It’s best to visit during off-peak hours and avoid the line. It tends to be busier for lunch and early dinner than late dinner (after 8pm). Weekends will always be busier than during the week. Plan accordingly but don’t miss it. It is an institution for a reason. It may not be the best sandwich ever but it is pretty great.

💜 Feeling the lavender haze... One of my favori

“Merry Christmas Everybody!”🎄 We spent a b

This audio cracked me up! 🤣 But it seriously re

OH, WHAT FUN! We spent a fun holiday themed evenin

Are You Having Any Fun? We sure did on @norwegianc

Happy Thanksgiving everyone! I wish you a beautifu

Do Not Disturb. Currently dreaming of my next crui