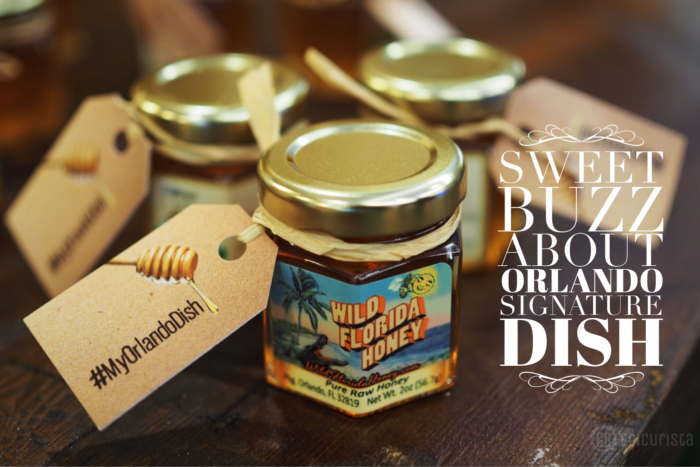 Does your city have a signature dish? Philly has cheesesteak and New York has cheesecake but Orlando, the big melting pot of cultures, doesn’t have one dish that distinctly defines it. That may be about to change. Find out what the sweet buzz around Orlando Signature Dish is all about. You can even be a part of history!

Orange County Mayor Teresa Jacobs was inspired to embark on this quest while indulging in an authentic Philly Cheesesteak during a visit to Philadelphia. “What dish represents Orlando?” she wondered, and there was no clear answer. She gathered a group of the area’s most notable chefs and food and beverage specialists together Visit Orlando destination experts earlier this year to consider exploring a signature dish for the region. A plethora of differing opinions arose.

One thing we know for sure, Orlando’s signature dish is no longer a giant turkey leg from the theme parks! Orlando’s culinary scene has come a long way baby! 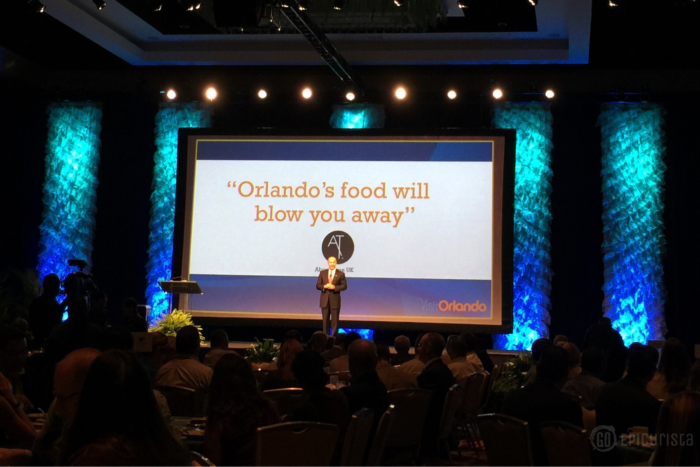 George Aguel of Visit Orlando Shares the National Buzz About The Culinary Scene!

Would it be one of our staples of Southern cuisine like Shrimp & Grits? Could it be Chicken and Waffles? Both great dishes found in seemingly every menu around town, but not necessarily unique to just Orlando.

Some opined it takes time for a dish to emerge as the one that represents a city as diverse in cultures and tastes as Orlando, and many agree (myself included). But you have to start somewhere, and that’s exactly what Visit Orlando, the official tourism association for the most visited destination in the United States, is doing with this competition. Like any good recipe, the search for a dish that represents Orlando is starting from the beginning, a signature ingredient.

A signature dish doesn’t happen overnight; ultimately it grows organically over time. This initiative is a first step in starting the conversation as to what dish the community thinks represents Orlando. In the process, we continue to expand people’s awareness of the rich and unique culinary offerings found throughout our region,” said Mayor Jacobs. “We are an incredibly diverse destination, which makes this both a challenge and an opportunity for everyone.”

During Visit Orlando’s Business Insight Membership Luncheon held at Hilton Orlando on August 23rd, the competition and search for the Orlando Signature Dish was announced. Some of the area’s best chefs, who took part in the original task force, were in attendance for the announcement including Tim Keating of Urbain 40, Kathleen Blake of The Rusty Spoon, James and Julie Petrakis of The Ravenous Pig, Cask & Larder and Polite Pig, Alexia Gawlak of Swine & Sons, Yuhi Fujinaga of Morimoto Asia, Jason Bergeron of Chroma Modern Kitchen + Bar, Bryan Thoman of Canvas Restaurant, Gloriann Rivera of 1921 by Norman Van Aken, among others.

An ingredient that immediately comes to mind when you think Central Florida and Orlando is oranges. We are in Orange County after all! But oranges would be too easy, and maybe a bit boring?

The task force took it a step further. To grow oranges you need bees. And we have plenty of bees (and honey) in Central Florida. The state produced 17 million pounds of honey in 2016!

Did you know Florida is one of the top honey producers in the US?

Local honey represents the diversity, sweetness and unique attributes of Central Florida. Due to its temperate climate and agricultural origins, Central Florida has long had an abundance of local crops and plants that contribute to numerous flavors of honey, including gallberry, saw palmetto, blueberry, Brazilian pepper, and – of course – popular orange blossom from the region’s once-flourishing citrus groves.

Florida has the largest variety of honey – more than any other state in the U.S.,” said Orange Blossom Beekeepers Association’s communications director Beth Fox. “The diverse ecology in Central Florida, in particular, yields a wide variety of nice honey flavored by different wildflowers.”

Did you know Florida has so many varieties of honey?

“Our climate is conducive to nearly continual honey-making, as Central Florida has lots of flowers and botanicals blooming all year-long for the bees,” said John Rife, the founder of local-sourced food hub the East End Market in Orlando (and a philanthropic beekeeper himself). “And it’s part of our history – growing up with orange trees in the back yard, watching bees pollinate.” It’s also a way to help fight the trend of declining honey bees nationwide, Rife notes.

Because of this mild climate, beekeepers from around the country also migrate to the state every winter to rebuild their colonies – trucking in about 280,000 colonies each year. The number of registered beekeepers in Florida has more than quadrupled in the past decade (4,500 in 2016), with about 500 new beekeepers registering each year, many in Central Florida, according to the University of Florida’s Institute of Food and Agricultural Sciences.

Wow! I didn’t know beekeeping was this big in Florida!

Honey is the Main Ingredient!

From a chef perspective, honey was a natural choice agreed Chef Julie Petrakis, co-owner of several local restaurants, including award-winning The Ravenous Pig, and a participant on the task force.

We use local honey in so many ways; it’s so versatile, has many flavor components and is locally sourced and authentic to our region. It’s been an inspiration for many of our dishes, as it can be both sweet and savory.”

Destination executives will use the challenge to showcase Orlando’s culinary offerings.

The significant depth and breadth of Orlando’s dining experiences have grown and become a vital part of the destination for visitors,” said George Aguel, president and CEO of Visit Orlando. “This initiative celebrates the culinary talent in our region, unites the community through a friendly competition, and allows us to create some great ‘buzz’ about Orlando’s dining scene and chef artistry.”

Did you know Florida has so many different kinds of honey?

Here’s what you need to know:

A call is out to all Orlando restaurant chefs to get creative with honey! The culinary competition is open and dishes can be submitted now through Oct. 1 on VisitOrlando.com/Dish.

The public will determine the top candidates and a panel of national and local food experts will it narrow down to the final winner. Dish criteria are:
• Local honey must be a key ingredient;
• The dish must be a dessert;
• It is available to the public in a restaurant or food venue;
• Only one entry per restaurant.

Want to be a part of selecting the Orlando Signature Dish? All you have to do is dine and vote!

Beginning Oct. 9, diners will find a list of participating restaurants and their respective honey dish “candidates” on VisitOrlando.com/Dish. The dessert will be featured on each restaurant’s menu, and the public is encouraged to try each one and vote for their favorite throughout the campaign (Oct. 2 – Nov. 3).

I can’t wait to see the restaurants chef’s who will put their sweet honey desserts up to the test!

Follow the hashtag #MyOrlandoDish on social media to be a part of the conversation.

Public Voting
A complete list of desserts and their locations is available on Visit Orlando’s website. Voters are encouraged to try as many honey dessert entries as possible before casting their one (and one only!) vote by Nov. 9

Celebrity Judging Panel
Once public votes narrow the field to the top 10, an esteemed judging panel will sample the finalists’ dishes to declare the sweet victor. The winner will be revealed on Dec. 7. The panel of judges will include:

Visit Orlando Team Wants You to Get Involved!

What dish do you think should win Orlando Signature Dish? It will be fun to participate. Vote online, then gather up your friends to try the finalist’s desserts and go #MakeSomedayHappen.

How is it almost the end of September?! We’re in

GORGEOUS! Hey Pasta lovers, have you seen a more b

✨ Vietnamese #MagicalDining in Orlando! ✨ What

Happy Friday! Where are you celebrating this weeke

Finally checked off @featherandquill_windermere of

IT'S OK TO DROOL. @raglanroadpub NEW Brunch dish a

Time to Surf & Turf! Have you been to @fourflaming

"I can see us lost in the memory, August slipped a

OPA! Are you ready for a party served alongside a

“ELVIS SLIDERS” fit for a King to honor the 45

Korean BBQ... but make it bougie! This course at @

NEW Orlando Restaurant You Must Add To Your List!