On a mission to #MakeSomedayHappen, I broke a world record! What I learned from The Great Namaste may surprise you!

Ever wanted to do something amazing but thought it impossible? I’ve always wanted to say “I’m a Guinness World Record holder!” I must admit though, I’ve thought about this in the same casual way I think about my daily chores. (Is there a world record for doing laundry?!) I’ve told myself I would look into the Guinness World Record “someday”, just not today (The laundry is calling!)


Everything possible was once thought impossible”

On Friday July 11, 2014, I was one of 808 people who shattered the Guinness World Record for the longest human yoga chain, a record previously set in India by 696 people. The Great Namaste, part of World Domination Summit (WDS), took place in Pioneer Courthouse Square (known as “Portland’s Living Room”) in downtown Portland. Imagine doing the wave at a football stadium. Now, instead of getting up on your feet with arms flailing in the air, you are falling like human dominoes into a series of yoga poses. Not sure who came up with this, but it was a crazy way to spend a morning! 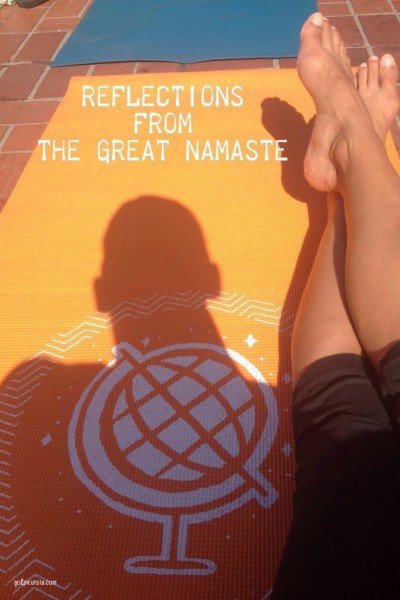 My Reflections from The Great Namaste may surprise you!

How to break a World Record and do the impossible:

1. Don’t Over-think it! Accept The Challenge.

The WDS community of unconventional thinkers challenged me to become a World Record holder. I accepted. Why? Because it sounded fun. I like yoga. I thought it would be a fun morning of downward dogs and child poses. The truth is, I did not think much of it, or of the logistics behind it. Somehow, the daunting thought of breaking a world record didn’t quite register. It sounded easy. With the click of the “accept” button on my computer screen, breaking a world record suddenly seemed possible, within reach. Does difficulty ever stop you from even trying something great?

How often have you hesitated to click the “accept” button? 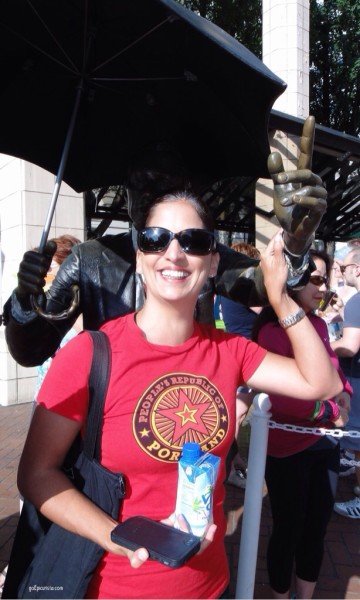 Ready for the challenge but the sun is scorching! Finding shade from “Umbrella Man”

2. Surround Yourself With Positive People

I invited my big sister Linda as she is the most positive person I know. She laughs at my jokes, which always made me feel funny and witty, until I realized she genuinely laughs at everyone’s jokes. She is that nice, and I love her for it. When you are setting out to break a world record or do anything amazing, the people you surround yourself with are the most important. At The Great Namaste, I realized that even with the heat testing our resolve, the #WDS2014 Community was full of the most positive, inspiring and encouraging people I’ve ever met. That certainly makes you feel like you can do anything!

Find a tribe that supports and encourages you and turn the impossible into possible.” 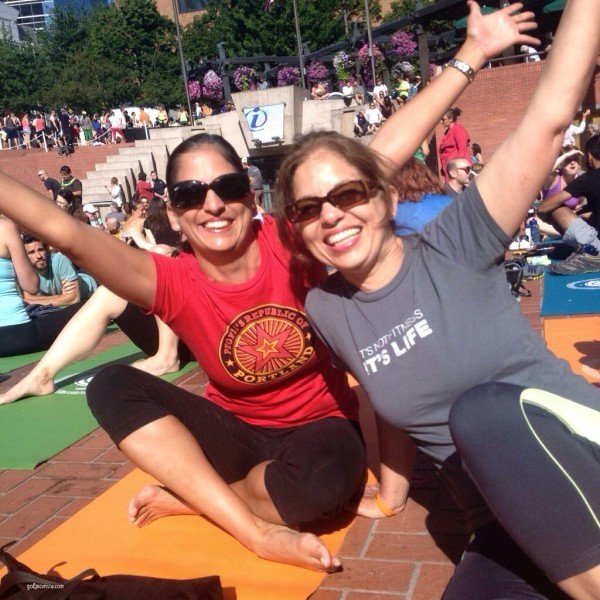 Surrounded by Positivity at The Great Namaste!

The WDS volunteers quickly moved the line wrapped around the block and deposited us like roulette balls onto bright-colored orange, green and blue yoga mats strategically arranged to create an aerial picture of the world. 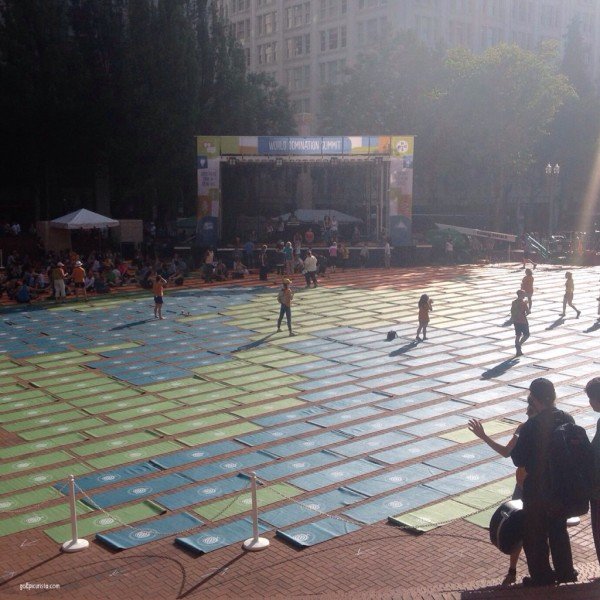 What color mat will we land on?

My sister and I landed on orange mats, which immediately brought a smile to our faces because it was our sister Carolyn’s favorite color. Call it superstition or a sign from the universe, but any time the color orange finds us, we feel as if she is saying hello to us from above. This was a great way to start the day. 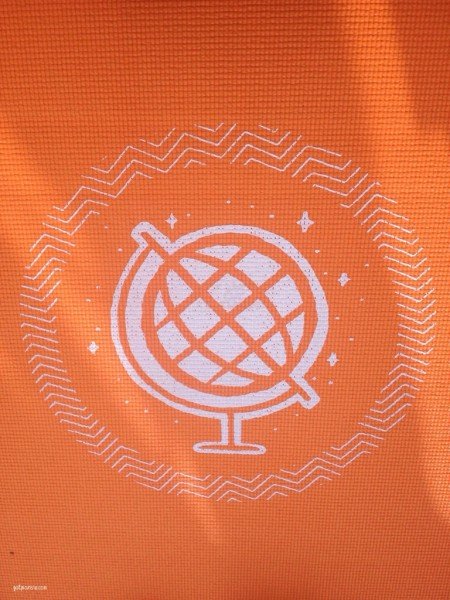 An Orange Yoga Mat made us smile!

We settled on our mats listening to fun music from the live DJ (imagine a dance party inside a yoga studio). We chatted with our neighbors and met folks from all over the world, danced, and enjoyed Kind bars and Coconut Water that were generously handed out. Some practiced yoga poses of the milder variety – child’s pose and such, while others were gracefully doing headstands and balancing poses. It was a beautiful morning in Portland. 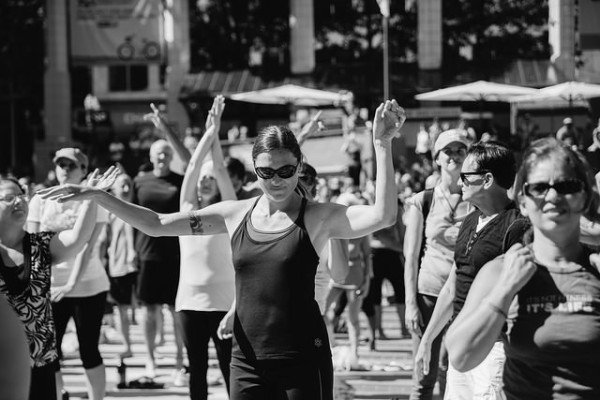 Dancing and Carefree at The Great Namaste. Photo courtesy of Armosa Studios

All of a sudden, that carefree feeling started to dissipate. I was impressed with these beautiful yogis flying in the air, and mildly terrified at the same time. It dawned on me. I had no idea what this challenge entailed exactly. They told us it would be easy, but that is a relative term. What if the organizers decided that a balancing pose would be a good way to break the record? Holding a simple tree pose, even for a few seconds, is tough. Panic and doubt started to creep in the back of my mind. My imagination threatening to get the best of me. “Can I do this?” “I’m going to be the weakest link in this chain!” 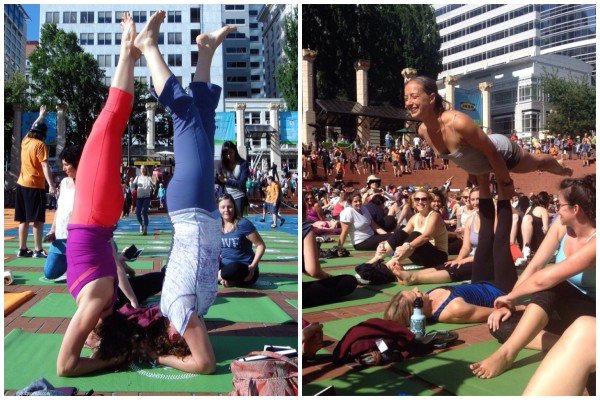 Yogis in the air and my imagination going wild! I hope we don’t have to do that to break the world record!

We were shown five, yes five, yoga poses we would do in succession. Thankfully, all easy and no tree pose! We started in mountain pose standing with arms on our sides and palms facing forward, then moved to hands to heart. Phew! that’s easy. “I can do this!” Amazing how our imagination can create fears that can potentially derail our efforts. 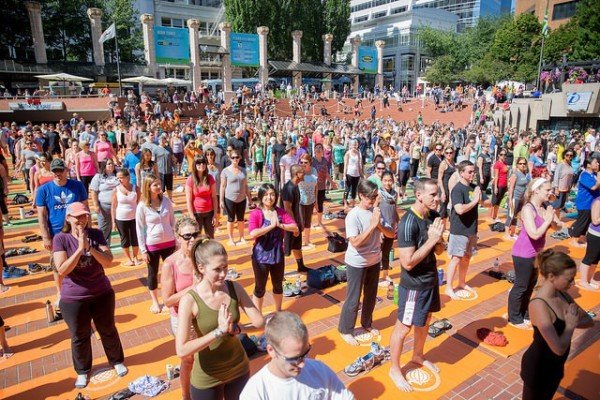 Hands to Heart! Can you spot us in the crowd anxiously waiting our turn? Photo courtesy of Armosa Studios

4. You are an important part of the chain

Moving between poses, from a seated pose with legs crossed (how you normally picture yogis), to a staff pose, seated with back straight and legs extended in front of you, and then on our backs with knees to chest, I realized that no matter how easy the poses were, we still needed to pay attention and do our part. Starting the pose after the person next to us finished theirs proved especially challenging when lying on your back. 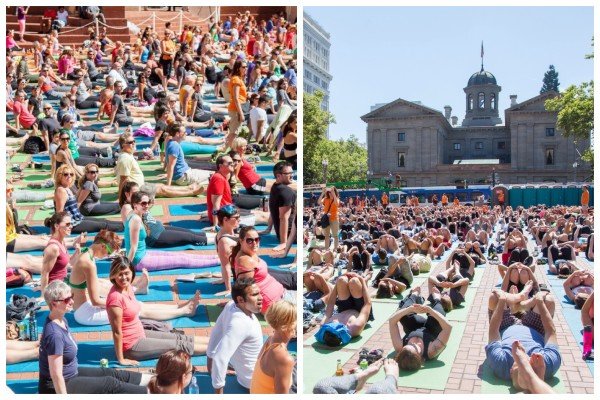 Achieving a world record is going to require a bit of work and discomfort after all, just not as bad as I briefly imagined. It was exciting, anticipating your turn and at the same time thinking “God please don’t let me be the one that screws this up and stops the chain” We held our poses for what seemed like an eternity in the scorching summer day while the other 807 people followed suit. The sequence went up and down rows like falling human dominoes. Each person as important as the other. Each link of the chain an absolutely essential component. 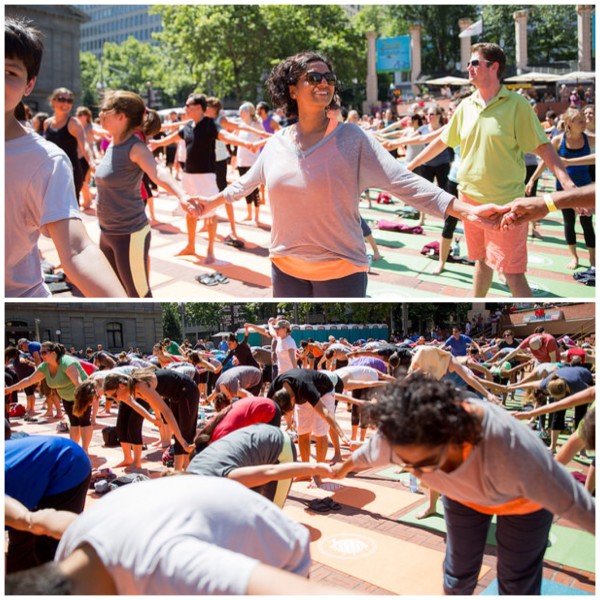 Great Namaste doing the wave! Each link of the chain is important. Photos courtesy of Armosa Studios

5. Keep an eye out for the big picture

We ended our world record challenge in corpse pose (how appropriate!). Looking up at the beautiful blue sky and blazing sun (temperatures reached 90 degrees before noon!), I imagined this must be what bacon feels like on a hot pan. We were all frying on the hot bricks of Pioneer Square! Yes, I tend to think of food analogies when I’m hungry. Thoughts of a big breakfast circling in my head. 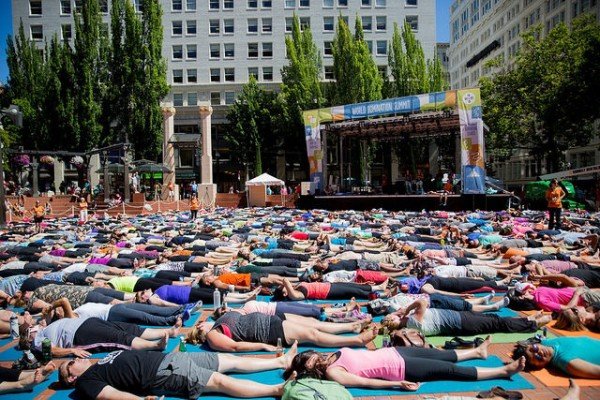 Thoughts of food aside, the greater impact of this event hit me. This wasn’t about yoga. This was about the power of community. People coming together to reach a common goal and do something amazing and impossible, break a world record! If we could do this for a carefree purpose, then we could also do this for more noble pursuits to improve the world around us. Each one of us doing our part. The genius folks of WDS chose to make this event about inspiration rather than publicity. And here I thought it was going to be just a fun morning of yoga.

I can now say “I am a World Record holder” and check it off my list of things I said I would do “someday”. I had an amazing time with my sister. I was part of history. It happened because I accepted the challenge. I didn’t over-think it. I showed up. I put it on my calendar and made it happen.

After the feelings of accomplishment washed over me, I realized, breaking a world record makes you hungry! The food enthusiast in me found one of the best brunch spots in downtown Portland, Mother’s Bistro. The Biscuits and Gravy are to die for. Plus, I had a strong craving for bacon!

My mission is to #makesomedayhappen one delicious bite, sip and trip at a time! I hope to inspire you to do the same. Celebrate life with family and friends. Do something amazing today, for someday may never come. GO Epicurista!

Next time someone challenges you to do something great, I hope you will click the “Accept” button. It just may be the best thing you ever did!

I can’t wait to see what inspiring and amazing things World Domination Summit 2015 has in store. If you want to #MakeSomedayHappen, join me! 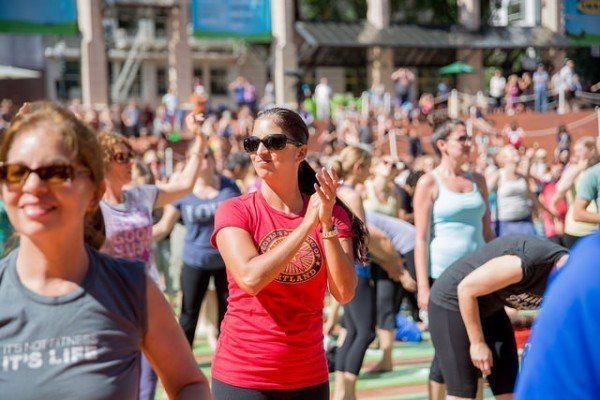 Here’s an awesome video of The Great Namaste from the “evil genius” mastermind behind World Domination Summit, Chris Guillebeau:

💜 Feeling the lavender haze... One of my favori

“Merry Christmas Everybody!”🎄 We spent a b

This audio cracked me up! 🤣 But it seriously re

OH, WHAT FUN! We spent a fun holiday themed evenin

Are You Having Any Fun? We sure did on @norwegianc

Happy Thanksgiving everyone! I wish you a beautifu

Do Not Disturb. Currently dreaming of my next crui